By John Hamilton on March 2, 2021, 12:30 pmComments Off on WeatherTech Raceway Laguna Seca Continues as Valuable Place to Sharpen Skills

Salinas, CA…Nine transporters, several chartered jets and a colorful mix of rental cars arrived in Monterey as a prequel to what this year’s Firestone Grand Prix of Monterey will look like in September. Four teams competing in the NTT INDYCAR SERIES are spending every minute to afford drivers valuable track time on the technically challenging WeatherTech Raceway Laguna Seca, while engineers tweak the chassis, engine and Firestone tires to fine tune the car’s setup to achieve optimal performance. 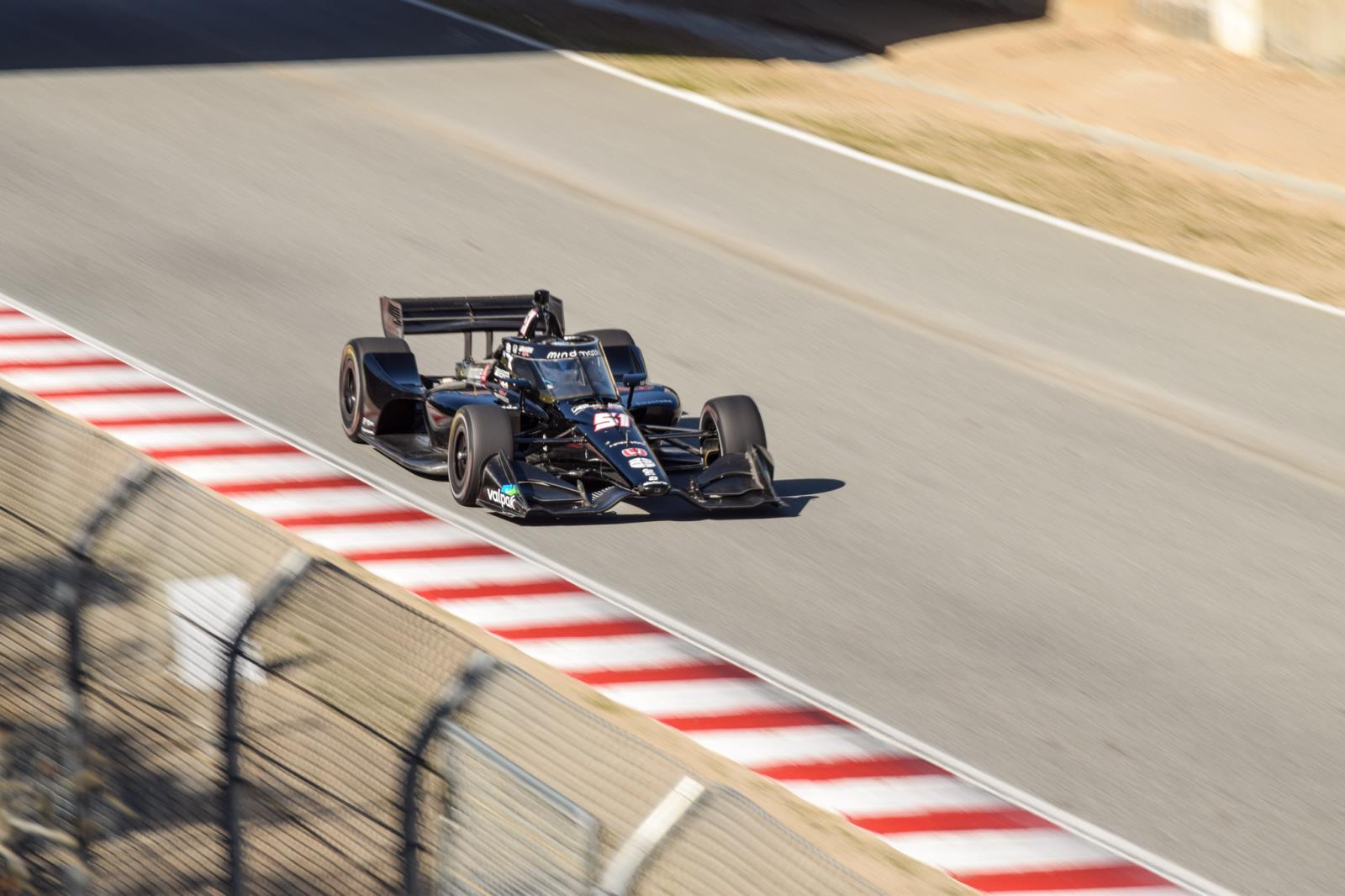 Romain Grosjean in his No. 51 Honda powering through turn 6

“The entire business community enjoys welcoming INDYCAR athletes, their crews and owners to Monterey,” commented John Narigi, president and general manager of Monterey’s WeatherTech Raceway Laguna Seca. “It is exciting to see and hear the finely tuned race cars on track, and to witness the intensity in the pits, even in the non-race environment.”

The paddock and grandstands are closed for today’s testing, yet there are still some INDYCAR fans who paid the day-use fee to watch the sessions from the surrounding hillsides. For campers, the INDYCARS provide another unexpected benefit of camping in the Laguna Seca Recreation Area.

On Tuesday and Wednesday, Indy Lights teams, headed by Andretti Autosport will be in Monterey conducting private tests in preparation for their season.

Early last month, Jimmie Johnson, Scott Dixon, Alex Palou and Marcus Ericsson made the trek to the Monterey Peninsula to prepare themselves for this season’s next race.

This last November, Johnson arrived at WeatherTech Raceway for the first time, focused and eager to spend time behind the wheel and better his lap times as a rookie Indy driver. With him was Alex Palou, a fellow Indy rookie coming to the esteemed Central California circuit to better himself as a driver, become familiar with his car, and sharpen his skills.

Dixon, having coached Johnson during his initial testing sessions last year, was here alongside Ericsson to re-familiarize themselves with a track they’ve had the chance to race in the past. Both drivers are ready for the challenge posed by their season closing race this year. Dixon will come armed with six previous championship wins and an Indy 500 victory. Palou, Ericsson and Johnson are all incredibly talented racers, but they will have to bring everything they’ve got in order to keep up with Dixon.

The track rental program is possible through a welcomed adherence of the strict health and safety protocols that were put into place last June. This includes registration logs at the gate, temperature checks at the paddock entry, face coverings, physical distancing, and contact tracing procedures.

Complete ticket packages and camping for the Firestone Grand Prix of Monterey, September 17-19, are on sale by visiting www.WeatherTechRaceway.com, sending a message to tickets@Laguna-Seca.com or by calling the Tickets and Accommodations specialists at 831-242-8200.