Pebble Beach, CA…Another cliff-hanger at Pebble Beach, this one memorable for Tom Hoge delivering all the right shots on the back nine to surge past Jordan Spieth and win the AT&T Pebble Beach Pro-Am for his first PGA TOUR title. 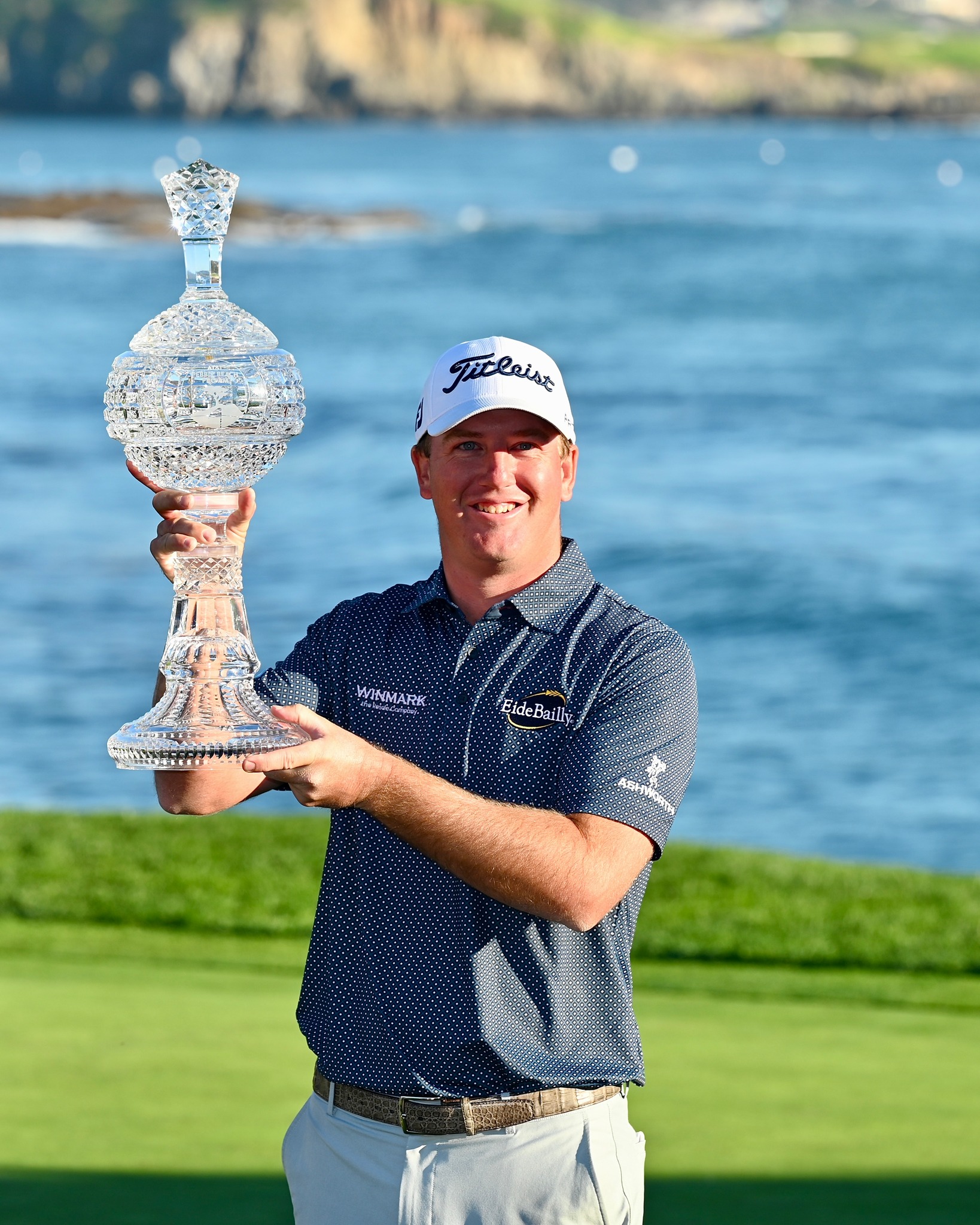 Hoge, one of seven players who had at least a share of the lead Sunday, came within inches of holing out from the 16th fairway, tapping in for birdie to catch Spieth. Then after Spieth made bogey from the bunker on the par-3 17th, Hoge rolled in a birdie from just outside 20 feet.

Hoge, a 32-year-old who grew up in North Dakota, had been runner-up twice in his previous 202 starts on the PGA TOUR, most recently at The American Express two weeks ago.

His time came amid the magnificent setting of Pebble Beach under a clear sky, and it didn’t come easily with so many players in the mix for so long.

Spieth looked like a winner when he birdied the 12th and 13th holes, and he reached the 15th tee with a two-shot lead. But he missed a 5-foot par putt on the 17th, and only as he stood under the pine in fairway on the par-5 18th did he realize he needed an eagle.

He caught a sandy lie that left him in a fairway bunker, and the best he could do was par for a 69. Hoge had to wait for Beau Hossler, one of three players who shared the 54-hole lead, who needed eagle on the 18th to force a playoff.

Hossler sent his fairway metal right into a bunker, blasted out long and three-putted for bogey for a 71 to finish alone in third.

Hoge earned his first trip to Augusta National for the Masters, along with getting a two-year exemption. Until this year, his best season on the PGA TOUR was in 2020 when he was 50th in the FedExCup and won just over $1.8 million.

So many others had chances, including Patrick Cantlay, the reigning FedExCup champion. He opened with two birdies and was still atop the leaderboard until a bogey at the eighth that left the final three hours wide open.

Cantlay didn’t make another birdie until the 18th when it was too late. He spent most of the back nine scrambling for par and his luck finally ran out on the 15th and 16th hole. He shot 71 and tied for fourth along with Troy Merritt (67).

Joel Dahmen (72) and Andrew Putnam (73) also had a share of the lead during the final round. They were in the group that tied for sixth.

Spieth won at Pebble in 2017, had a two-shot lead going into the final round last year and had everything seemingly in his favor. That includes the signature moment of this week, when he had his left foot planted on the edge of a 60-foot cliff on the eighth hole Saturday that only gave him anxiety after he realized the risk he had taken.

His hopes began to fade with an 8-iron he was starting down on the 17th, shocked that it came up short and in the sand.

Instead, he blasted out 5 feet long and hit the putt too hard to take the left-to-right break.

Hoge hit the ball so pure on the back nine that he had a birdie putt from inside 20 feet on every hole until he got to the 17th, and that’s where he made the biggest putt of his career.

“I’m almost a little in shock,” Hoge said. “It’s been so long since I won anything that I forgot how to celebrate.”