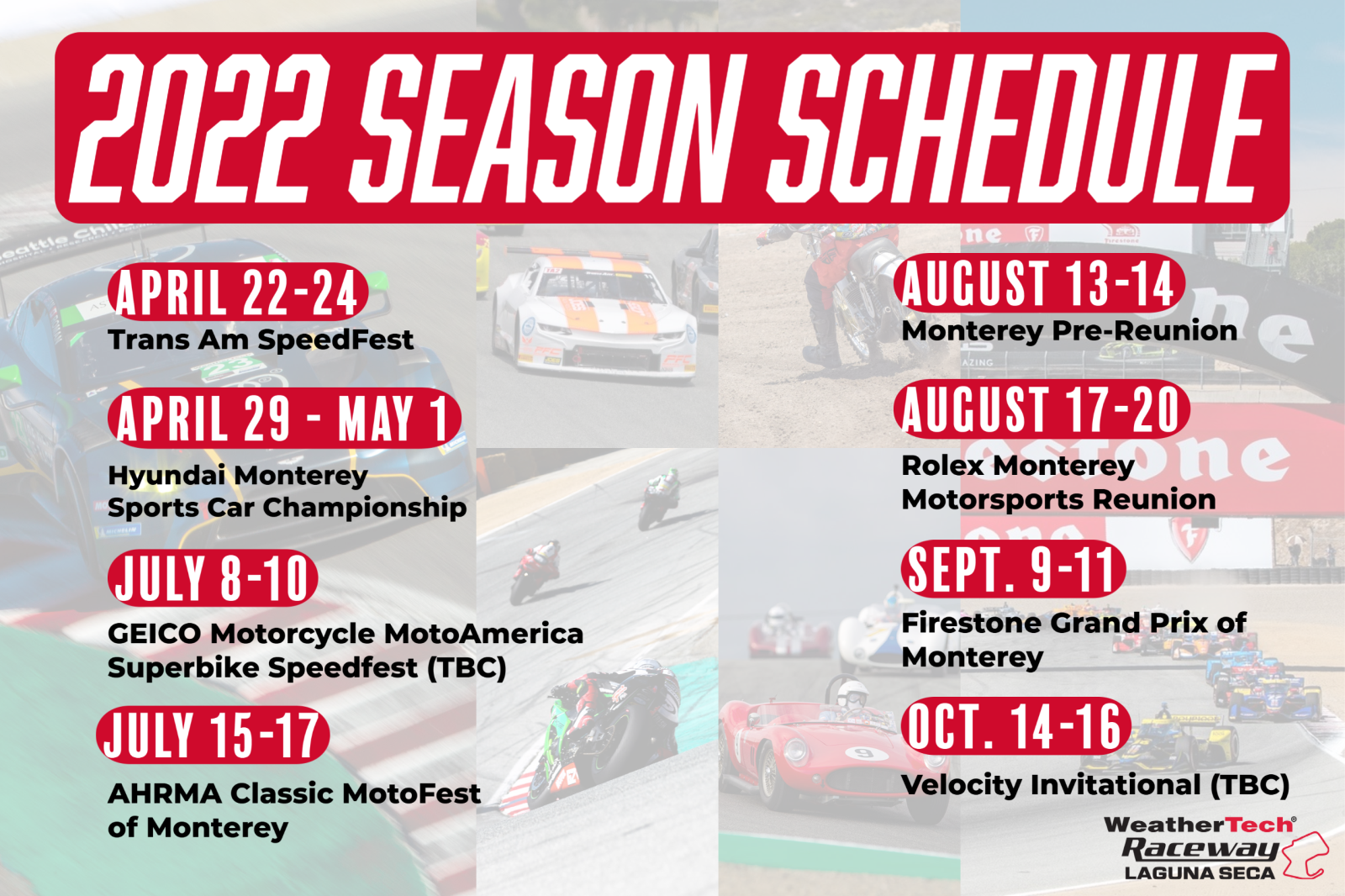 The season begins April 22-24 with the Sportscar Vintage Racing Association’s Trans-Am Speedfest, which features a dozen racing groups flying down the track and exhibiting new and historic Trans Am power.

The GEICO Motorcycle MotoAmerica Superbike Speedfest at Monterey zooms into the Central Coast July 8-10 (TBC). The 2022 MotoAmerica Series will feature Superbike, Supersport, SportbikeTrackGear.com Junior Cup, Stock 1000 and Twins Cup. The immensely popular King Of The Baggers is also scheduled to race, and there will be a kid’s zone, making the event a family affair.

The AHRMA Classic MotoFest of Monterey keeps the motorcycle action rolling July 15-17. This event celebrates vintage motorcycles with on and off-road competition. In addition to the races, the event also offers entertainment options, such as expansive swap meets, bike shows, cycle corrals, live music and other family friendly opportunities.

The 2022 Monterey Classic Car Week officially kicks off Aug. 13-14 with the Monterey Pre-Reunion, which features more than 300 unique and historic race cars. The field is comprised of carefully selected entries that all have race provenance.

The Rolex Monterey Motorsports Reunion, which continues to be one of the most prestigious motorsport events in the world perennially, will feature a very special marque in 2022. The Aug. 17-20 edition will serve as the official start of a year-long celebration of the 100th anniversary of the 24 Hours of Le Mans, which will allow a dream lineup of authentic and historic cars and legendary drivers who drove them to victory in the world’s most famous sports car race.

The roar of the NTT INDYCAR SERIES’ Firestone Grand Prix of Monterey returns Sept. 9-11. Adding even more anticipation and excitement to INDYCAR’s arrival in Monterey is the scheduling, as the race will serve as the finale for the 2022 INDYCAR season. A champion will be crowned on the WeatherTech Raceway podium on Sept. 11.

The 2022 event season at WeatherTech Raceway will conclude with the Velocity Invitational Oct. 14-16 (TBC). A gathering of 200-plus extraordinary historic race cars will be complemented by a full array of VIP hospitality experiences.

As it becomes available, more information on tickets and camping will be posted at WeatherTechRaceway.com.