New York, NY…S&P Dow Jones Indices (S&P DJI) today released the latest results for the S&P CoreLogic Case-Shiller Indices, the leading measure of U.S. home prices. Data released today for May 2021 show that home prices continue to increase across the U.S. More than 27 years of history are available for the data series, and can be accessed in full by going to https://www.spglobal.com/spdji/. 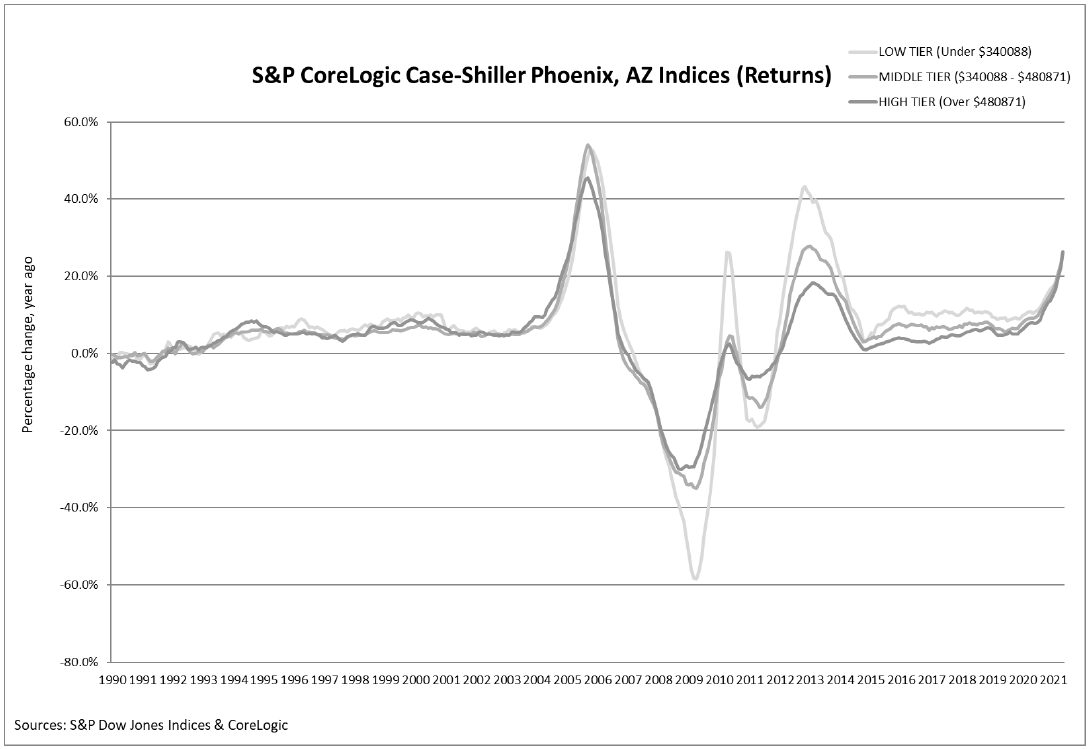 Phoenix, San Diego, and Seattle reported the highest year-over-year gains among the 20 cities in May. Phoenix led the way with a 25.9% year-over-year price increase, followed by San Diego with a 24.7% increase and Seattle with a 23.4% increase. All 20 cities reported higher price increases in the year ending May 2021 versus the year ending April 2021.

The charts on the following page compare year-over-year returns of different housing price ranges (tiers) for Phoenix and San Diego.

Before seasonal adjustment, the U.S. National Index posted a 2.1% month-over-month increase in May, while the 10-City and 20-City Composites both posted increases of 1.9% and 2.1%, respectively.

“Housing price growth set a record for the second consecutive month in May 2021,” says Craig J. Lazzara, Managing Director and Global Head of Index Investment Strategy at S&P DJI. “The National Composite Index marked its twelfth consecutive month of accelerating prices with a 16.6% gain from year-ago levels, up from 14.8% in April. This acceleration is also reflected in the 10- and 20-City Composites (up 16.4% and 17.0%, respectively). The market’s strength continues to be broadly-based: all 20 cities rose, and all 20 gained more in the 12 months ended in May than they had gained in the 12 months ended in April. Prices in 18 of our 20 cities now stand at all-time highs, as do the National
Composite and both the 10- and 20-City indices.

“A month ago, I described April’s performance as “truly extraordinary,” and this month I find myself running out of superlatives. The 16.6% gain is the highest reading in more than 30 years of S&P CoreLogic Case-Shiller data. As was the case last month, five cities – Charlotte, Cleveland, Dallas, Denver, and Seattle – joined the National Composite in recording their all-time highest 12-month gains. Price gains in all 20 cities were in the top quartile of historical performance; in 17 cities, price gains
were in top decile.

“We have previously suggested that the strength in the U.S. housing market is being driven in part by reaction to the COVID pandemic, as potential buyers move from urban apartments to suburban homes. May’s data continue to be consistent with this hypothesis. This demand surge may simply represent an acceleration of purchases that would have occurred anyway over the next several years. Alternatively,
there may have been a secular change in locational preferences, leading to a permanent shift in the demand curve for housing. More time and data will be required to analyze this question.