By John Hamilton on August 25, 2013, 11:35 amComments Off on Rim Fire Pushing Further Into Yosemite National Park

Groveland, CA…The now 15th largest fire in California History is making a push further into Yosemite National Park and closer to Hetch Hetchy today. Fire remained fairly active overnight in most all divisions. Increased activity developed on the eastern edge of the fire with very active burning inclusive of rapid rates of spread, torching and spotting. Fire crews continue to work toward increasing containment of the Rim Fire. A major effort focused is underway to hold the fire east of the North Fork of the Tuolumne River. Fire crews have strengthened fire lines that are holding above the community of Pine Mountain Lake. Additional efforts are focused on the eastern edge of the fire in Yosemite National Park… 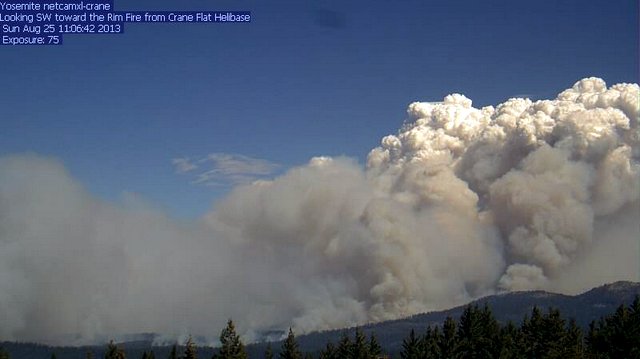 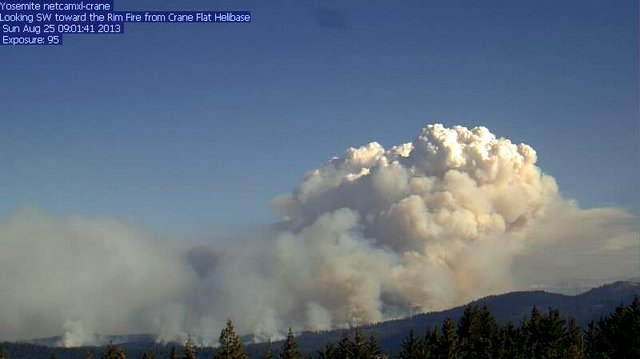 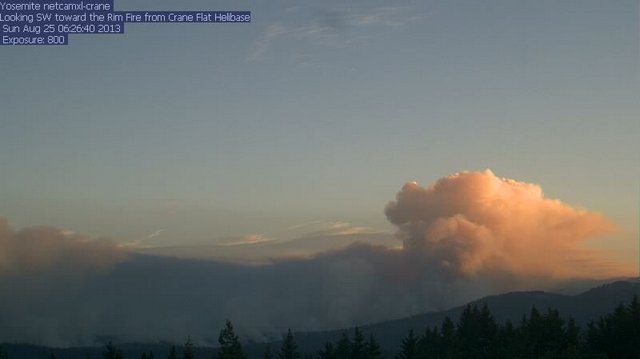 Sunrise on the Rim Fire at 6:30am this morning and top photo is from just after 9am and the Rim is on the march again. Update as of 9:39am This morning’s maps have just been released and we have made a couple of adjustments and posted this mornings media release which had some minor variations from the posted numbers earlier. For a larger photo of today’s map just click on the map below… 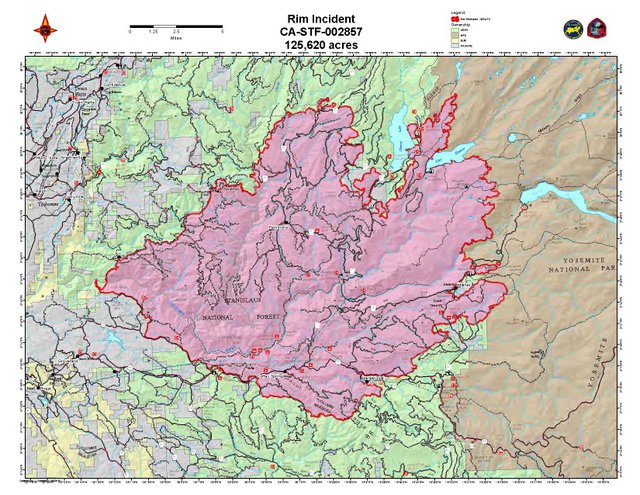 Fire Cause: Under Investigation Total Personnel: 2,846

The Rim Fire continues to burn on the Stanislaus National Forest, Yosemite National Park, Bureau of Land Management and State responsibility land. The fire is exhibiting continued growth to the northeast and east. On the western side of the fire, crews successfully conducted firing operations to bring the fire line down to the Tuolumne River in efforts to keep the fire from spreading to the west toward the Highway 108 corridor. Aerial resources continue to be effective in reducing the spread of fire toward the Highway 108 corridor. Crews continue to construct line construction where accessibility and safety allows. In addition, structure defense and contingency planning continues in the Mather area.

Smoke continues to be an issue within the Rim Fire perimeter with visibility less than a mile.

The evacuation advisory and order were lifted for the residents of Pine Mountain Lake and Buck Meadows yesterday, with the exception of Graham Ranch Road.

An evacuation advisory has been issued for Tuolumne City and the area east of Highway 108 to Mi-Wok Village. Highway 120 at the Yosemite National Park boundary west to Buck Meadows has been evacuated.

An evacuation center is at the Mother Lode Fairgrounds in Sonora.

For more information on this press release or if you have questions regarding the information, please contact the Rim Fire at 805-727-4775 Updated information can also be obtained at http://www.inciweb.org/incident/3660/