By John Hamilton on March 21, 2021, 12:48 amComments Off on No Tickets Required for the Abundant Wildlife that Thrive at Monterey County’s Laguna Seca Recreation Area

Salinas, CA…Sitting on 542 acres and nestled up against BLM land, the Laguna Seca Recreation Area is home to a wide array of animals – both common and rare. Before the track was completed in November of 1957, the Laguna Seca Recreation Area as we know it today was a large portion of untouched land owned by the military – making a perfect habitat for a significant amount of wild animals. Both predator and prey made it their home, and the construction of the track didn’t seem to phase them or diminish their presence at all. 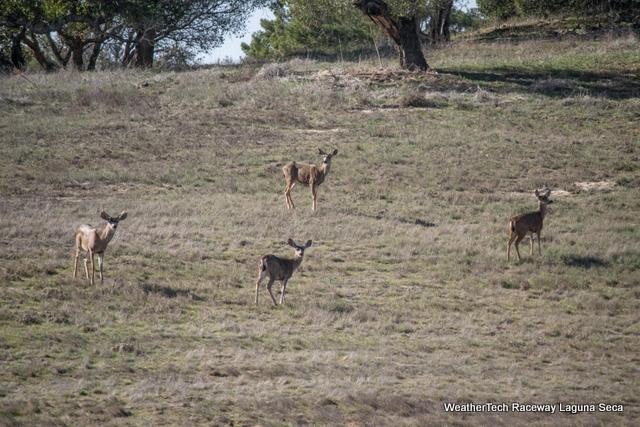 Blacktail Deer are spotted daily, grazing on the hillsides in and near the campgrounds. They’re timid creatures that are always alert, and commonly seen in groups. These grazers can be found throughout Monterey County, but prefer to stay on the edges of the forests near the coast, to give them a good balance of food and shelter. They don’t have opposable thumbs or a taste for sports, but they’re most common near golf courses where the freshest grass always grows.

Bobcats, coyotes, and gray foxes are also common predators in the park lurking in the shadows during dawn and dusk hours. With the abundance of ground squirrels in their elaborate tunnels spread throughout the park’s many hillsides, there are plenty of opportunities for these animals to try and catch a meal – and they’re spotted often.

Mountain lions, the cat known by many names, are a more rare sighting as they’re incredibly elusive and wary of humans and human activity. A hungry cat does wander within the park boundaries from time to time however, as they prefer to stay within close range of their prey. On the BLM trails just outside the park is where they’re most often spotted, so stay alert and be careful trekking the trails at night, dawn or dusk.

In the skies of Laguna Seca Recreation Area are a diverse group of raptors. Red tailed hawks, red shouldered hawks, Ferruginous and Cooper’s hawks patrol the skies in search of a meal. Throughout the night, great horned owls, Western screech owls, long and short eared owls fly silently through the night hunting small mammals. On incredibly rare occasions, one of only 518 California Condors in the region will ride the thermals over the track, perhaps watching a race or two. Of all the animals in the park, it is the crows who seem the most curious about the people and action on track, and sometimes aren’t satisfied with only a “bird’s eye view.”

In the lake, the most common species spotted are Mallard ducks, followed closely behind by the Great Blue Heron, Great White Egret and smaller, more agile Green Heron. In the winter, Pintail and Bufflehead ducks pop in for a visit to rest during their winter migration. Western Bluebirds, meadowlarks, warblers and wrens fill the area with song.

Campers at the Laguna Seca Recreation Area get the opportunity to be greeted by many of nature’s incredible creatures in all three campgrounds, though they’re more likely to be met by raccoons, opossums and a wide array of frogs – including the tree-dwelling Northern Pacific Treefrog, who sit high up in the trees (sometimes a surprising distance from water) and call as they emerge in the fall from their summer hibernation. California brush rabbits and California quail are abundant and usually seen together coming in and out of the bushes looking for food.

No Tickets Required for the Abundant Wildlife that Thrive at Monterey County’s Laguna Seca Recreation Area added by John Hamilton on March 21, 2021, 12:48 am
View all posts by John Hamilton →