By News Desk on October 22, 2021, 7:45 pmComments Off on Local CHP Traffic Stop Results in Narcotics Seizure

Monterey County, CA…California Highway Patrol officers initiate an enforcement stop on a suspected DUI driver and uncover 48 pounds of methamphetamine. On Thursday morning, October 21, 2021, at approximately 0130 hours CHP officers conducted an enforcement stop on a maroon Toyota Corolla traveling northbound on US-101 south of Chualar. CHP officers contacted the driver, a 44-year-old resident from Pomona, CA, and subsequently arrested him on suspicion of DUI. 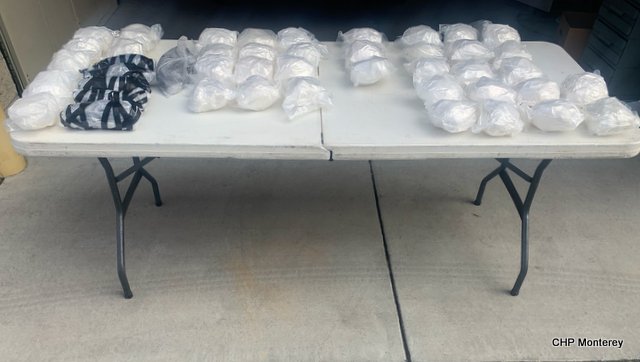 Upon further investigation, officers found what appeared to be methamphetamine on the driver’s person. During the vehicle inventory, several vacuum sealed packages containing methamphetamine were located throughout the vehicle. A Soledad Police Department K9 unit walked the perimeter and alerted on the vehicle.

The Multi-Agency Detail for Combating Auto Theft (MADCAT) assisted CHP Monterey officers with the investigation resulting in the seizure of additional narcotics located at a residence. The total street value of the seizure is estimated at approximately $180,000. The

44-year-old driver from Pomona was booked into the Monterey County Jail and charged with Section 23152(g) CVC-Misdemeanor, Section 11378 H&S-Felony, and Section 11379 H&S-Felony.

The mission of the CHP is to provide the highest level of Safety, Service, and Security.