Syracuse, NY…Former President Trump was not alone in having returns he filed while he was President allegedly escape detailed scrutiny by the Internal Revenue Service (IRS). While the 2022 Inflation Reduction Act provides the IRS with a large expansion of future funding to beef up audits of the rich, last year IRS revenue agents were only able to audit a small number of millionaire returns. Indeed, during FY 2022, the odds a millionaire was audited by an IRS revenue agent was just 1.1 percent. 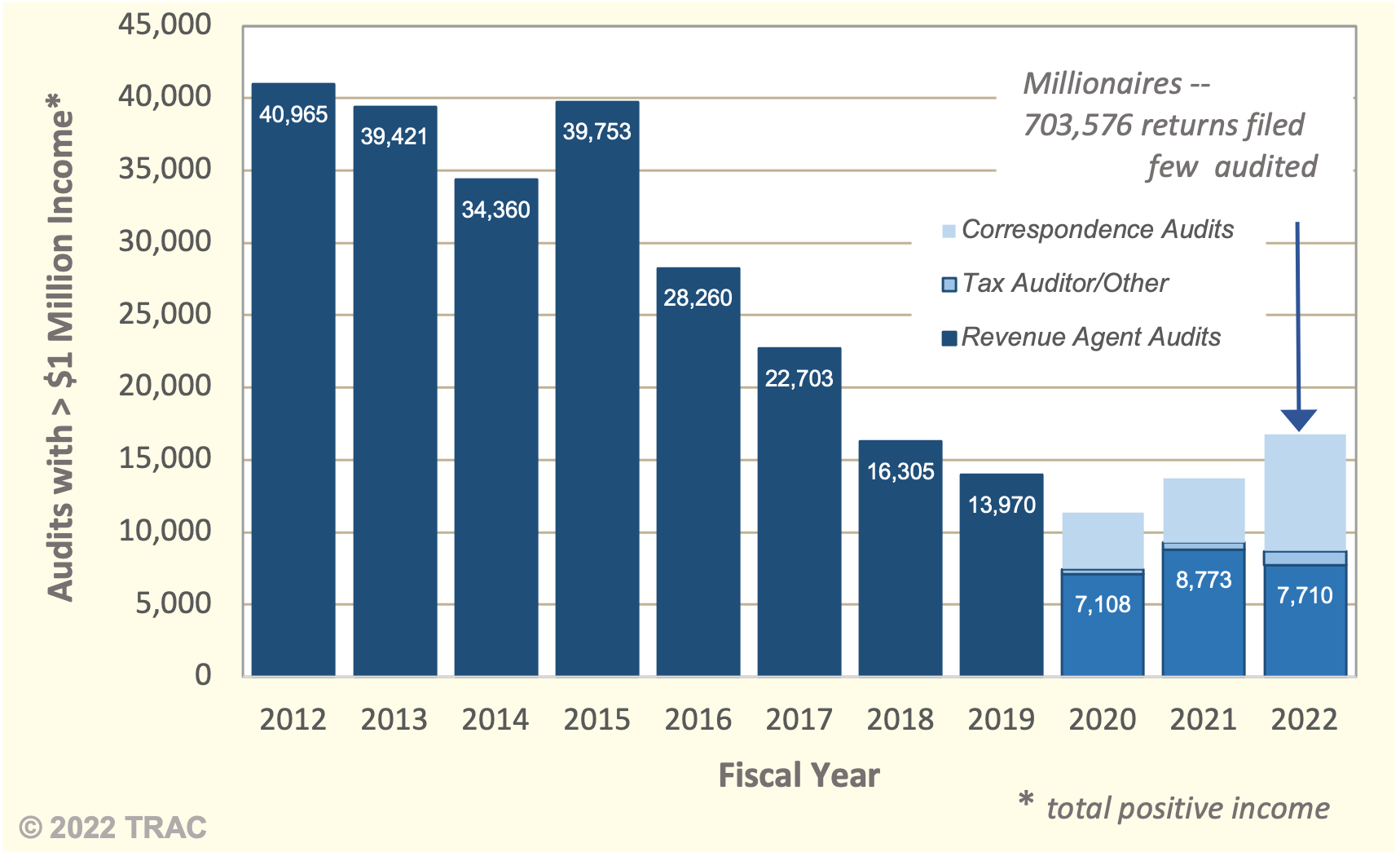 During FY 2022, years of budget cuts and increased needs in other sectors left the IRS with only around 1,400 staff-years of revenue agent time to apply to the 165 million income tax 1040 returns that were filed. Even though the IRS applied one-fourth of these hours to auditing millionaires, still barely over 1 out of every 100 millionaires were audited.

In place of face-to-face audits, IRS has increasingly relied on highly automated processes to send letters through the mail (a “correspondence audit”) asking for more documentation on a specific item. In FY 2022, 85 per cent of what IRS counts as audits of 1040 returns were these letters. Even for millionaires the IRS has turned to these. Indeed, last year about half (48%) of millionaire audits consisted of these simple letter inquiries. [1]

Adding those who received a letter asking for more documentation on a specific item, the odds of millionaires receiving some attention by the IRS rose to 2.8%. Yet this left somewhat under 700,000 millionaires — taxpayers reporting a million or more in total positive income — with absolutely no scrutiny whatsoever. [2]

These results are based on internal IRS management reports released each month to the Transactional Records Access Clearinghouse (TRAC) at Syracuse University under a court order entered after successful litigation under the Freedom of Information Act.

However, the recent uptick shown in Figure 1 is somewhat misleading since these totals reflect an increasing reliance on the fiction of auditing a millionaire through simply sending a letter through the mail. In FY 2020, for example, 63 percent were regular audits by revenue agents. In FY 2022 this had fallen to just 46 percent.

The taxpayer class with unbelievably high audit rates – five and a half times virtually everyone else – were low-income wage-earners taking the earned income tax credit. This credit is provided to offset the taxes for the lowest wage-earners in the country. As we previously have reported, [3] this group of taxpayers have historically been targeted not because they account for the most tax under-reporting, but because they are easy marks in an era when IRS increasingly relies upon correspondence audits yet doesn’t have the resources to assist taxpayers or answer their questions. See Figure 2. 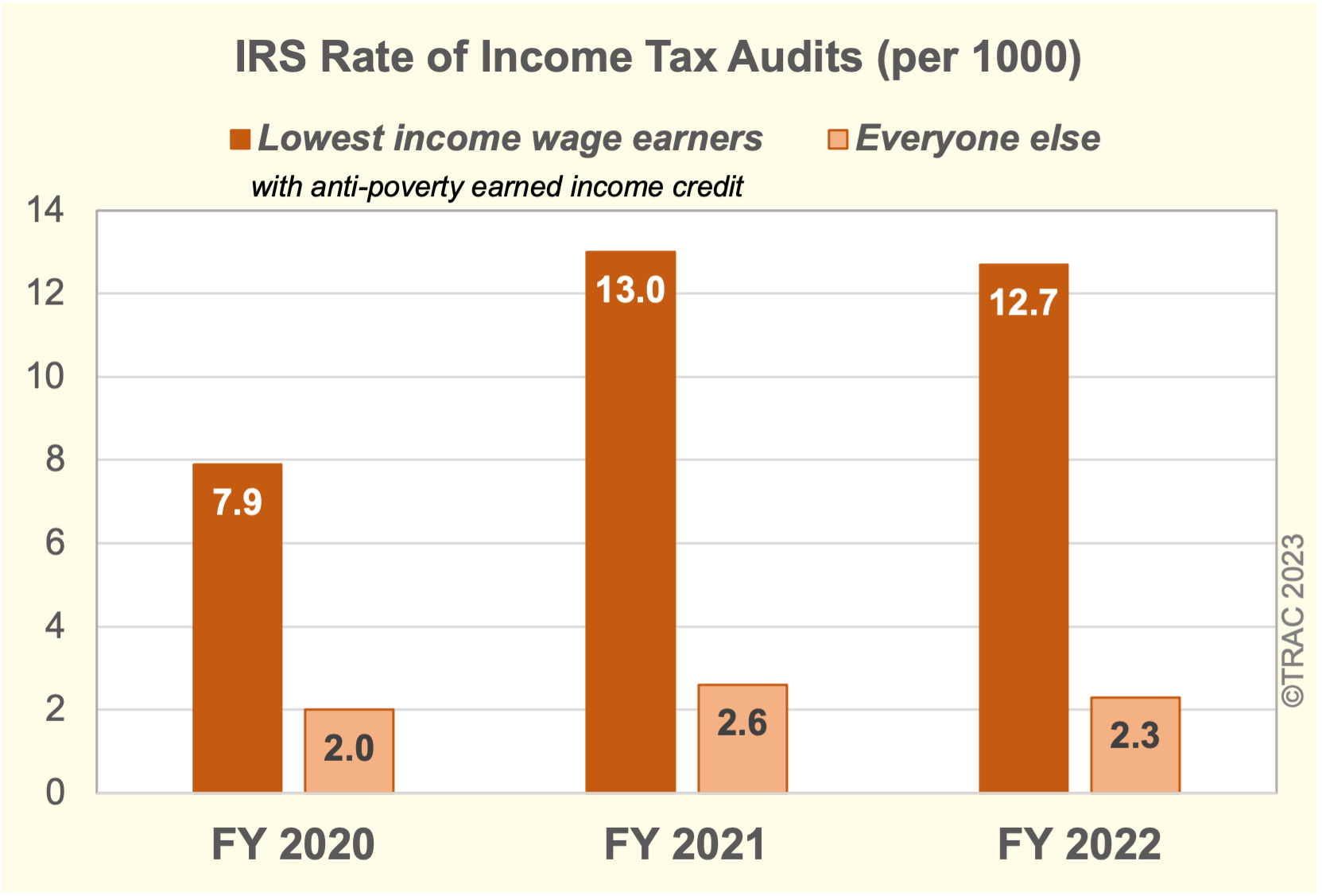 As National Taxpayer Advocate Erin M. Collins pointed out in her annual report to Congress, there is fundamental unfairness in the situation faced by these low-income taxpayers who have complex issues inherently involved with substantiating the anti-poverty earned income tax credit. “If the IRS does not receive a response [to the letters it sends], it will generally disallow the item(s) claimed and ultimately issue a Notice of Deficiency.” She further noted:
“The IRS correspondence audit process is structured to expend the least amount of resources to conduct the largest number of examinations – resulting in the lowest level of customer service to taxpayers having the greatest need for assistance.”

Collins faulted IRS for assuming that these particular correspondence audits were simple. The requirements to substantiate earned income tax credits weren’t simple for this taxpayer segment, but often very complex, she noted. Further, the IRS was faulted for not providing “comprehensible IRS correspondence” when sending these audit letters. IRS letters can be only charitably described as composed in “computer-speak” jargon which fails to make much sense. She further faulted the IRS for only providing these individuals with a generic toll-free telephone number which historically had been inadequately staffed, and where the public rarely can get through to speak with anyone knowledgeable to actually assist them.

A more detailed breakdown of the odds of audit by level and source of income is provided in Table 1. The IRS divides taxpayers into different examination classes. The IRS sees the typical taxpayer reporting an income of less than $200,000. These taxpayers faced an odds of audit of just 1.9 out of every 1,000 returns filed (0.19%). This group accounts for 80 percent of all 1040 returns once these poorest wage-earners and those reporting $200,000 or more in positive income are set aside.

Millionaires, as discussed previously, did have the highest odds of being audited. However, if one ignores the fiction of auditing a millionaire through simply sending a letter through the mail, the odds that millionaires received a regular audit by a revenue agent (1.1%) was actually less than the audit rate of the targeted lowest income wage-earners whose audit rate was 1.27 percent! See Table 1 below.

While these small differences may sound trivial, the difference represented tens of thousands of low -income families. And the question remains, should these low-income families be the ones targeted when millionaires are responsible dollarwise for most tax underreporting?

IRS Needs To Lift Secrecy Curtain on Its Audit Programs

With the IRS now to receive a large infusion of funds to beef up its audit program, greater transparency is needed. Taxpayers should be able to receive basic facts about how the agency is applying the appropriations Congress provides without having to obtain a court order as TRAC originally had to do. Unfortunately, the limited audit statistics the tax agency formerly published in its annual IRS Data Book have largely been discontinued, depriving the public of the solid facts needed to fairly judge what the agency’s audit program is actually doing. [4]

This recent secrecy curtain to shield the IRS from public scrutiny was initiated under former IRS Commissioner Charles P. Rettig who served as Commissioner between October 1, 2018, and November 11, 2022. Indeed, when Commissioner Rettig was asked during testimony last year before the House Ways and Means Oversight Subcommittee about TRAC’s report on FY 2021 IRS audit results, Commissioner Rettig angrily charged: “that report by Syracuse University is absolutely 100% false.”

This was astounding since these weren’t TRAC’s figures but were the actual statistics IRS itself had compiled internally. TRAC wrote Commissioner Rettig an open letter calling upon him to “publish the figures for individual income tax return examinations.” That way Congress and the public could directly compare [his] figures against those contained in TRAC’s report and decide for themselves whether the serious accusations the IRS Commissioner hurled were true or false. Commissioner Rettig never responded to TRAC’s letter. And although the agency has now compiled numbers internally for both FY 2021 and FY 2022 audits, the secrecy curtain remains in place.

Congress passed in a party line vote an unprecedented infusion of new funding – some $80 billion — for the Internal Revenue Service with much of it targeted for beefed up tax enforcement. While ostensibly aimed to go after “wealthy Americans [and] corporate scofflaws,” critics ask: what is to stop the agency with this army of new IRS agents from instead going after middle-class taxpayers?

Answering this question remains a key challenge that Danny Werfel faces if confirmed as the new IRS Commissioner. One of his first orders of business should be lifting this secrecy curtain. He needs to put in its place a full and detailed transparency program to keep the public informed on how these new funds are being applied in the selection of taxpayers for stepped up audits.

Footnotes
[1]^ An additional 6 percent were handled by tax auditors or compliance officers who typically are assigned to examine simpler returns such as those filed by what IRS classifies as lower income taxpayers.
[2]^ The latest available data show that IRS received 703,576 returns from taxpayers who reported receiving a million dollars or more in income which IRS terms “total positive income” with even higher numbers projected to be filed in this year’s upcoming filing season.
[3]^ See March 8, 2022 report “IRS Audits Poorest Families at Five Times the Rate for Everyone Else,” and March 29, 2022 report “IRS Continues Targeting Poorest Families for More Tax Audits During FY 2022.”
[4]^ Removal of current complete audit numbers from the IRS Data Book has also allowed the agency to give a false impression on its alleged increased targeting of high income returns when how it shows this increase largely reflects the relative speed of audit completions for different classes of returns rather than any true increase in audit rates. The agency also no longer includes the real audit rate for the lowest income taxpayers claiming the earned income credit, but consolidates these with higher income taxpayers claiming this credit.
TRAC is a nonpartisan, nonprofit data research center affiliated with the Newhouse School of Public Communications and the Whitman School of Management, both at Syracuse University. For more information, to subscribe, or to donate, contact trac@syr.edu or call 315-443-3563.