Washington, DC…The Consumer Price Index for All Urban Consumers (CPI-U) increased 1.2 percent in March on a seasonally adjusted basis after rising 0.8 percent in February, the U.S. Bureau of Labor Statistics reported today. Over the last 12 months, the all items index increased 8.5 percent before seasonal adjustment. Increases in the indexes for gasoline, shelter, and food were the largest contributors to the seasonally adjusted all items increase. The gasoline index rose 18.3 percent in March and accounted for over half of the all items monthly increase; other energy component indexes also increased. The food index rose 1.0 percent and the food at home index rose 1.5 percent. 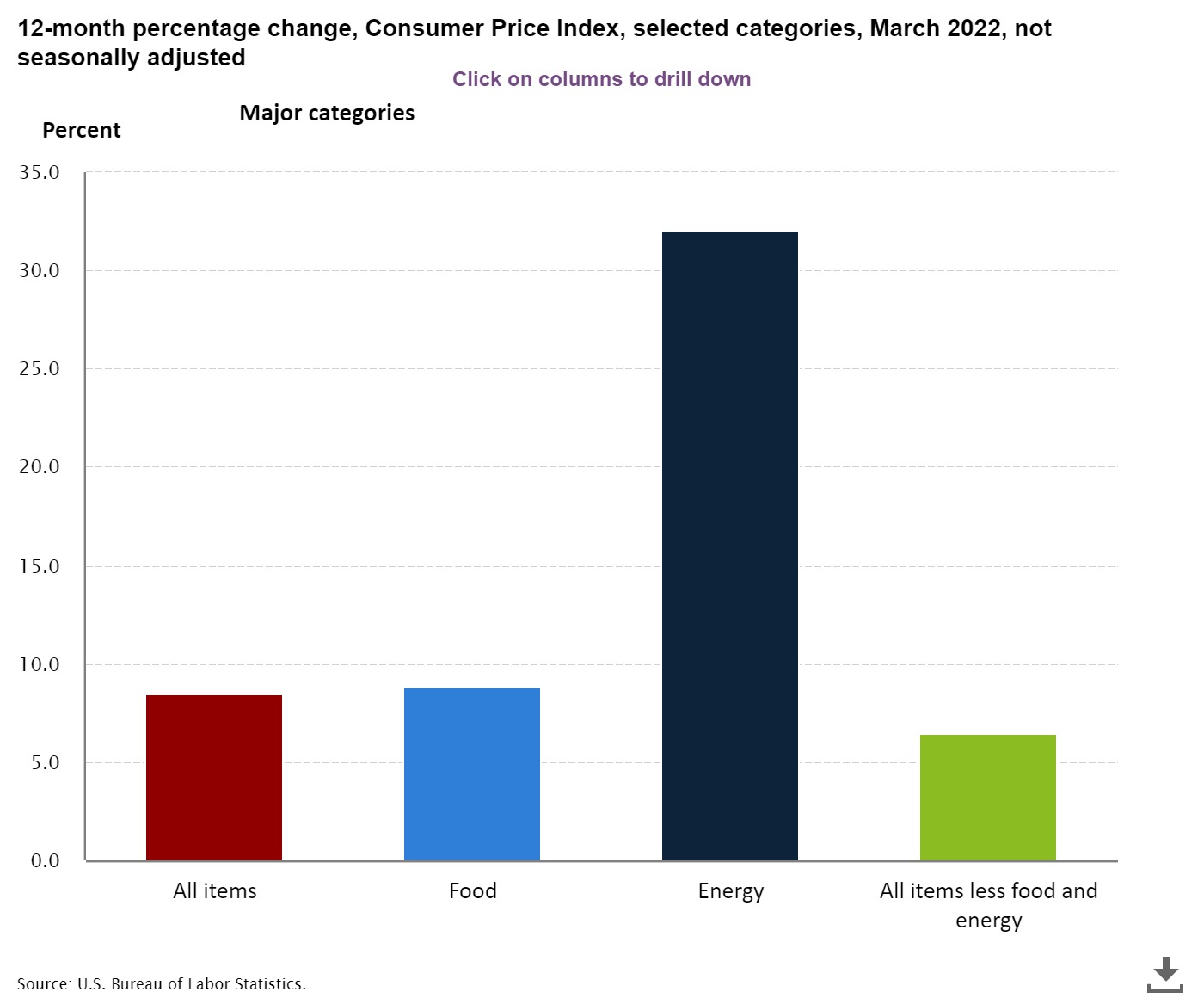 The index for all items less food and energy rose 0.3 percent in March following a 0.5-percent increase the prior month. The shelter index was by far the biggest factor in the increase, with a broad set of other indexes also contributing, including those for airline fares, household furnishings and operations, medical care, and motor vehicle insurance. In contrast, the index for used cars and trucks fell 3.8 percent over the month.

The food away from home index rose 0.3 percent in March, a smaller increase than in
recent months. The index for full service meals rose 0.7 percent over the month, in
contrast to the index for limited service meals which declined 0.2 percent, its first
decrease since October 2018.

The food at home index rose 10.0 percent over the last 12 months, the largest 12-month
increase since the period ending March 1981. The index for meats, poultry, fish, and
eggs increased 13.7 percent over the last year as the index for beef rose 16.0 percent.
The other major grocery store food group indexes also rose over the past year, with
increases ranging from 7.0 percent (dairy and related products) to 10.3 percent
(other food at home).

All items less food and energy

The index for new vehicles increased 0.2 percent in March after rising 0.3 percent
the previous month. The index for used cars and trucks fell 3.8 percent in March,
its second consecutive monthly decline after a series of large increases. The index
for communication was also among those few indexes which declined over the month,
falling 0.5 percent.

The CPIs are based on prices of food, clothing, shelter, fuels, transportation, doctors’
and dentists’ services, drugs, and other goods and services that people buy for day-to-day
living. Prices are collected each month in 75 urban areas across the country from about
6,000 housing units and approximately 22,000 retail establishments (department stores,
supermarkets, hospitals, filling stations, and other types of stores and service
establishments). All taxes directly associated with the purchase and use of items are
included in the index. Prices of fuels and a few other items are obtained every month in
all 75 locations. Prices of most other commodities and services are collected every month
in the three largest geographic areas and every other month in other areas. Prices of most
goods and services are obtained by personal visit, telephone call, or web collection by the
Bureau’s trained representatives.

In calculating the index, price changes for the various items in each location are
aggregated using weights, which represent their importance in the spending of the
appropriate population group. Local data are then combined to obtain a U.S. city average.
For the CPI-U and CPI-W, separate indexes are also published by size of city, by region of
the country, for cross-classifications of regions and population-size classes, and for 23
selected local areas. Area indexes do not measure differences in the level of prices among
cities; they only measure the average change in prices for each area since the base period.
For the C-CPI-U, data are issued only at the national level. The CPI-U and CPI-W are
considered final when released, but the C-CPI-U is issued in preliminary form and subject
to three subsequent quarterly revisions.

The index measures price change from a designed reference date. For most of the CPI-U and
the CPI-W, the reference base is 1982-84 equals 100. The reference base for the C-CPI-U is
December 1999 equals 100. An increase of 7 percent from the reference base, for example,
is shown as 107.000. Alternatively, that relationship can also be expressed as the price
of a base period market basket of goods and services rising from $100 to $107.

Sampling Error in the CPI

The CPI is a statistical estimate that is subject to sampling error because it is based
upon a sample of retail prices and not the complete universe of all prices. BLS calculates
and publishes estimates of the 1-month, 2-month, 6-month, and 12-month percent change
standard errors annually for the CPI-U. These standard error estimates can be used to
construct confidence intervals for hypothesis testing. For example, the estimated standard
error of the 1-month percent change is 0.03 percent for the U.S. all items CPI. This means
that if we repeatedly sample from the universe of all retail prices using the same
methodology, and estimate a percentage change for each sample, then 95 percent of these
estimates will be within 0.06 percent of the 1-month percentage change based on all retail
prices. For example, for a 1-month change of 0.2 percent in the all items CPI-U, we are 95
percent confident that the actual percent change based on all retail prices would fall
between 0.14 and 0.26 percent. For the latest data, including information on how to use
the estimates of standard error, see
https://www.bls.gov/cpi/tables/variance-estimates/home.htm.

Use of Seasonally Adjusted and Unadjusted Data

For analyzing short-term price trends in the economy, seasonally adjusted changes are usually
preferred since they eliminate the effect of changes that normally occur at the same time and
in about the same magnitude every year—such as price movements resulting from weather events,
production cycles, model changeovers, holidays, and sales. This allows data users to focus on
changes that are not typical for the time of year. The unadjusted data are of primary interest
to consumers concerned about the prices they actually pay. Unadjusted data are also used
extensively for escalation purposes. Many collective bargaining contract agreements and pension
plans, for example, tie compensation changes to the Consumer Price Index before adjustment for
seasonal variation. BLS advises against the use of seasonally adjusted data in escalation
agreements because seasonally adjusted series are revised annually.

The Bureau of Labor Statistics uses intervention analysis seasonal adjustment (IASA) for some
CPI series. Sometimes extreme values or sharp movements can distort the underlying seasonal
pattern of price change. Intervention analysis seasonal adjustment is a process by which the
distortions caused by such unusual events are estimated and removed from the data prior to
calculation of seasonal factors. The resulting seasonal factors, which more accurately represent
the seasonal pattern, are then applied to the unadjusted data.

For additional information about the CPI visit www.bls.gov/cpi or contact the CPI Information and
Analysis Section at 202-691-7000 or cpi_info@bls.gov.

If you are deaf, hard of hearing, or have a speech disability, please dial 7-1-1 to access
telecommunications relay services.