By News Desk on October 25, 2021, 10:51 pmComments Off on Independent Research Finds Fueling Costs for Electric Vehicles (EV) are Often Higher Than for Internal Combustion Engines (ICE)

East Lansing, MI…Anderson Economic Group released today the first in a series of analyses examining the transition from ICE vehicles to EVs.  This initial 36-page study is the culmination of comprehensive research comparing the “apples-to-apples” costs involved in fueling both EVs and ICE vehicles. AEG undertook this study after noting that many commonly cited figures did not account for the true costs associated with EV charging. 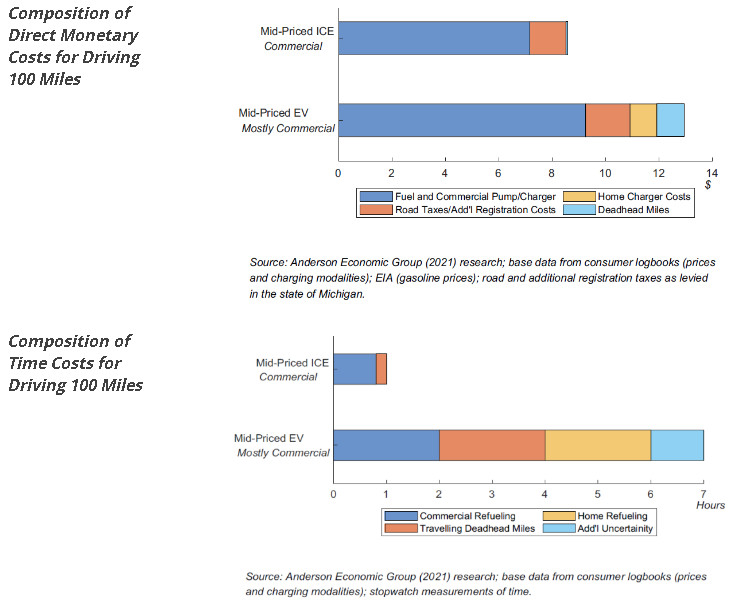 AEG calculated the cost of chargers, additional road taxes, commercial charging fees, and “deadhead” miles for three different EV driving scenarios and compared these with 3 analogous ICE vehicle scenarios. The research found that fueling an EV is often more expensive than fueling an ICE vehicle. It further found that fueling costs are far more variable for EVs. The authors go on to note the significant time costs imposed on EV drivers as a result of both inadequate infrastructure and wait times associated with fueling, which can be five to ten times the cost for ICE drivers.

According to study author Patrick Anderson, “These numbers may be surprising to those who haven’t relied upon an electric vehicle, but it’s important we safeguard the public from ‘charger shock.’ Before consumers can feel comfortable buying EVs in large numbers, they need to understand the true costs involved.”

Future studies in the EV transition series (available by subscription only) will draw from ongoing research published to the Automotive Dashboard (andersoneconomicgroup.com/automotive-dashboard). This publicly available resource offers a rolling data overview that tracks metrics critical to the auto industry.

Mr. Patrick Anderson is Anderson Economic Group’s principal and CEO. His company is one of the most recognized boutique consulting firms in the United States, with years of expertise in the US automotive industry. The company has consulted for manufacturers that include General Motors, Ford, DaimlerChrysler, Honda, and others, along with nearly 200 automobile dealerships representing virtually every brand in the market.

Mr. Alston D’Souza works in Anderson Economic Group’s strategy and business valuation practice area, where he serves as senior analyst and data scientist. While at AEG, Mr. D’Souza’s work has focused on damages and market analysis. He holds a master’s degree in econometrics and quantitative economics from the University of Wisconsin-Madison, and a Bachelor of Technology degree from the National Institute of Technology Karnataka (India).

Founded in 1996, Anderson Economic Group (AEG) is one of the most recognized boutique consulting firms in the United States. The company has offices in East Lansing, Michigan and Chicago, Illinois. The automobile industry is a primary area of specialization for the experts at AEG, who approach this critical automotive transition from a perspective that recognizes the role everyday consumer choices will play in driving EV market trends.