“IF” by Rudyard Kipling…Dedicated to Jay S. Hamilton & Dads Everywhere ~ By John Hamilton

Arnold, CA…We originally posted this for Father’s in 2006. My father would turn 104 this year if he were here today. This poem was my father’s favorite. This one is dedicated to my Father…Jay S. Hamilton. Dad was born in November of 1916 and died in May of 1991 of a Glioblastoma brain tumor. His life saw deep tragedy but he always rose above it. He was born in a house in rural Oklahoma with no electricity or running water. His Mom burned to death when he was 9 years old from a kerosene lantern fire while he was at home….. 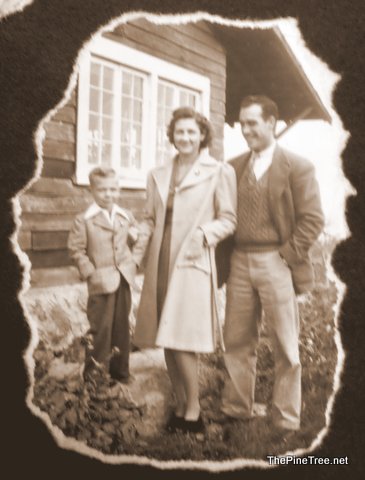 My Parents And Oldest Brother Circa 1943.

After his mom’s death his dad lost his grip on life and started gripping a bottle instead. After her passing he was raised mostly by his older sisters. At times they knew hunger. One month he recalled their diet consisted mainly of biscuits of flour and lard and literally squirrel stew.

As a young man he loved baseball and found he could pitch. He started pitching varsity baseball when he was in the 8th grade. He carried his high school team to the state championships multiple years. He was offered a Minor League Chicago Cubs contract during his Junior Year but threw out his pitching arm in the State Championships (Which They Won). His baseball hero’s were Satchel Page & Dizzy Dean. He attended a negro league game and watched Satchel pitch and tried to emulate his style.

He never mentioned to us what must have been the almost unimaginable disappointment the injury was and of not being able to pursue a Major League career. In fact it was my mother that told me about his pitching after his death.

At 16 in the midst of the depression he hitchhiked to California in 1932 with $5.00 to start a new life. He spent his first night in California sleeping on a park bench in Visalia.

He built a new life indeed. He paid his way through college and graduated debt free. In fact his college actually owed him money after graduation as he had a contract to supply the school with wood to fire their boiler.

He married his college sweetheart, became a teacher, raised 4 sons and farmed in the Turlock area for 50 years. For most of his years farming we had a dairy. While I was in elementary school he sold off the dairy cows and we transitioned over to beef cattle.

It never seemed odd to us that he had a had a full time teaching job and was the principal of at least two schools while running a dairy. We thought growing up that all men worked 18 hours a day and only 6 hours milking on his day off for church. He did this with such effortless good will and cheer that we thought 100 plus hour workweeks were just what adults did.

One example of his “normal” work habits…in the 1950s he went back to school to get his Masters Degree while he was a teacher/principal of a school and running the dairy. The pasture needed watering and he was afraid he would oversleep his alarm. So he opened the water gate into the field one night and then went down to the other end of the pasture and fell asleep in the grass. He figured the water would wake him when it reached him. It did and a new day started.

He stayed married and in love with his sweetheart for 53 years before losing his last battle with cancer in 1991. He remains the greatest and most inspirational man I have ever known. He didn’t just tell us about life. .He did something much harder…he lived an example everyday.

Once he set his mind to a task nothing would stand in the way of it’s completion. He lived an upright, honorable and determined life. My brothers and I were constantly amazed at the amount of work he could fit into a day.

He never preached to his sons about how they should do this or that. He did something much harder…He lived an exemplary life and let it speak for him.

A few days before he died with his son’s around him we asked him what was the secret to his life. He said “Work, It was always there for me” Work for Jay Hamilton wasn’t something he had to do but a friend that was always there to pour his life into and give it direction.

His generation was made of different stuff. They knew real hardships…The Great Depression, World War II and more! If we can live up to their legacy nothing can stand in our way!

Thanks Dad!!
Your Son
John Hamilton

IF
By, Rudyard Kipling

If you can keep your head when all about you
Are losing theirs and blaming it on you,
If you can trust yourself when all men doubt you,
But make allowance for their doubting too;
If you can wait and not be tired by waiting,
Or being lied about, don’t deal in lies,
Or being hated, don’t give way to hating,
And yet don’t look too good, nor talk too wise:

If you can dream – and not make dreams your master;
If you can think – and not make thoughts your aim;
If you can meet with Triumph and Disaster
And treat those two impostors just the same;
If you can bear to hear the truth you’ve spoken
Twisted by knaves to make a trap for fools,
Or watch the things you gave your life to, broken,
And stoop and build ’em up with worn-out tools:

If you can make one heap of all your winnings
And risk it on one turn of pitch-and-toss,
And lose, and start again at your beginnings
And never breathe a word about your loss;
If you can force your heart and nerve and sinew
To serve your turn long after they are gone,
And so hold on when there is nothing in you
Except the Will which says to them: ‘Hold on!’

If you can talk with crowds and keep your virtue,
‘ Or walk with Kings – nor lose the common touch,
if neither foes nor loving friends can hurt you,
If all men count with you, but none too much;
If you can fill the unforgiving minute
With sixty seconds’ worth of distance run,
Yours is the Earth and everything that’s in it,
And – which is more – you’ll be a Man, my son!