By News Desk on July 15, 2021, 8:39 pmComments Off on Governor Newsom Deploys Additional Firefighting Resources to Oregon to Combat Bootleg Fire

Sacramento, CA…As hot and dry conditions continue to fuel dangerous wildfires across the West, Governor Gavin Newsom today announced the deployment of additional firefighting resources to Oregon to help combat the Bootleg Fire and support the response to new fires. This action follows the deployment of California firefighting support sent to Oregon last week through the Emergency Management Assistance Compact. 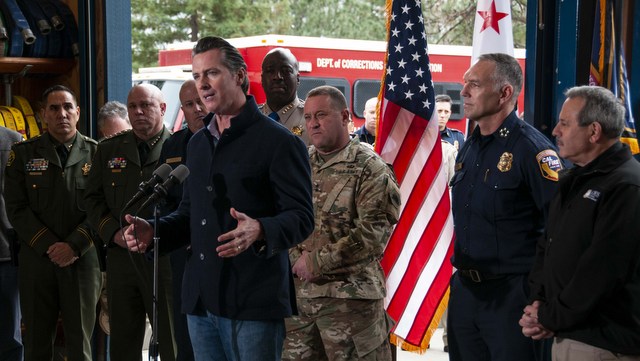 Climate change impacts are contributing to wildfires that are increasingly dangerous and destructive across the Western U.S. California’s latest mutual aid deployment to Oregon comes just a day after the National Multi-Agency Coordinating Group elevated the National Preparedness Level to Level 5 – its highest level – due to high fire activity across the country and resources committed to large fires.

In total, California has sent eight strike teams/task forces, or 40 fire engines with firefighting crews, to Oregon. Type 3 and Type 6 engines are the most used engines for wildland urban interface fires and are known for their off-road capabilities.

California has regularly offered support to assist in response and recovery for disasters throughout the United States and internationally through EMAC requests. EMAC, which includes the participation of all 50 states, the District of Columbia, Puerto Rico, Guam and the U.S. Virgin Islands, is a nationally recognized mutual-aid system that provides the foundation for states to request and send resources across their borders when impacted by a disaster.

For more information on the Emergency Management Assistance Compact, follow this link.