By John Hamilton on May 28, 2021, 2:37 pmComments Off on Fatal Solo Vehicle Collision on Seabright Avenue

Santa Cruz, CA…On Thursday, May 27, 2021, at approximately 1:11 am, the Santa Cruz Police Department (SCPD) received 911 calls regarding a solo vehicle collision in the 1200 block of Seabright Avenue. When officers arrived, they located a male pinned under the involved Mercedes sedan. Santa Cruz Fire extricated the man from the car and pronounced the driver deceased. 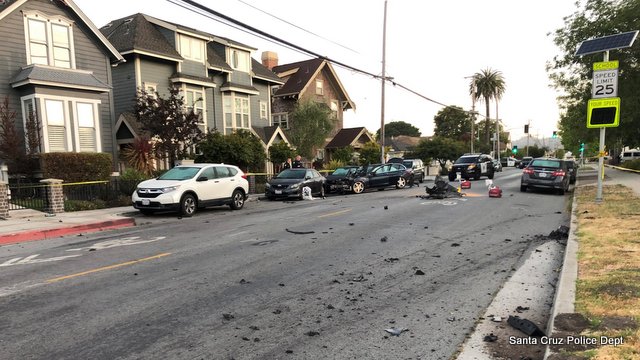 The preliminary investigation reveals the Mercedes was traveling at a high rate of speed northbound on Seabright when it failed to negotiate the curve to the left at Windham. As a result, the Mercedes struck a curb and became airborne, hitting a tree and two parked cars before landing back on its wheels with the driver trapped beneath.
The deceased driver is a 29-year-old from Santa Cruz County. The driver’s name is being withheld until the family is notified.

If anyone witnessed this incident or has information about this case, is encouraged to contact the Santa Cruz Police Department Traffic Investigations Sergeant Michael Hedley at 831-420-5777 ext. 4834.