San Diego, CA…Torrey Pines delivered again. Seventy-second hole. Birdie putt. A delirious crowd going wild for one of the pre-championship favorites. Thirteen years ago, it was Tiger Woods who delivered the “Expect anything different” putt heard around the world. On a cool, overcast Sunday in 2021, it was Jon Rahm hammering home the most memorable 24-foot birdie putt of his young career, one that gave the fiery Spaniard a one-stroke victory over Louis Oosthuizen in the 121st U.S. Open Championship. 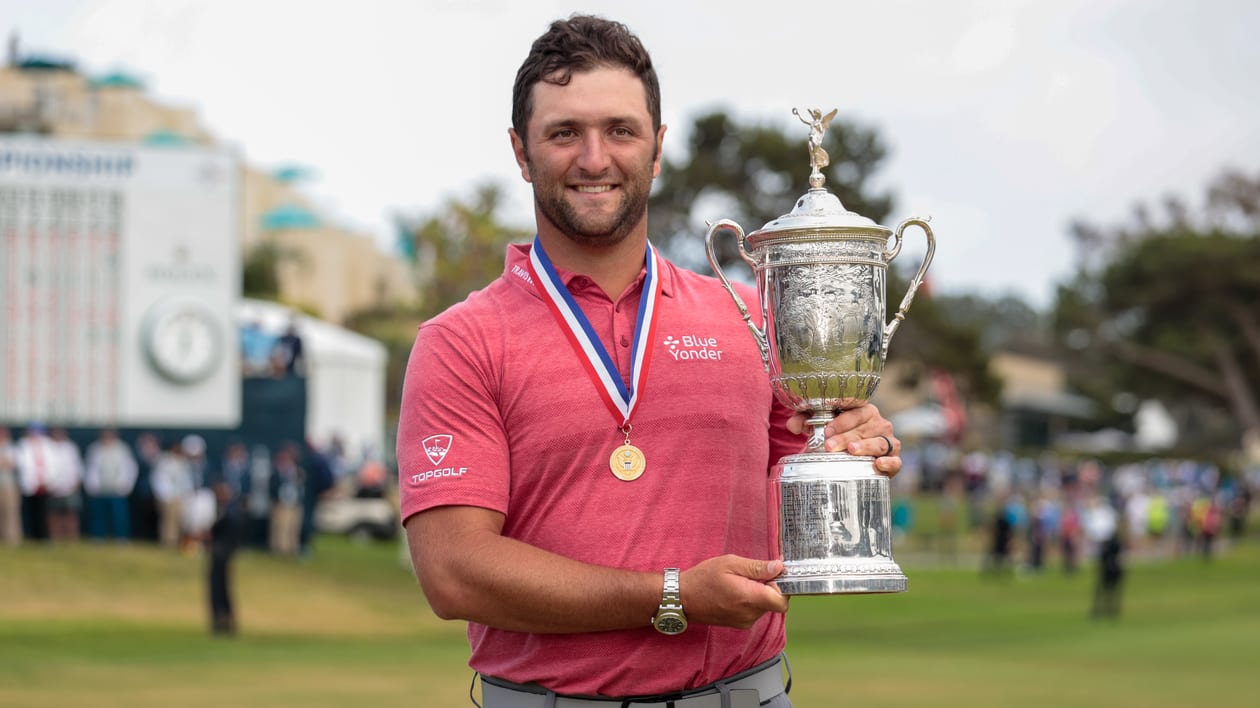 Jon Rahm became the first male or female from Spain to win a USGA championship with his one-stroke victory in the 121st U.S. Open at Torrey Pines.

Punctuating a 4-under-par 67 to match the championship’s lowest round, the 26-year-old became the first player from Spain to win any USGA championship. It also was his second title on the South Course at Torrey Pines, a venue he has grown to love. Torrey Pines was the site of his first PGA Tour victory in 2017 and where he later proposed to his college sweetheart, Kelley Cahill. It has been a whirlwind two weeks for Rahm, who had to withdraw from the Memorial Tournament with a six-stroke 54-hole lead on June 5 due to a positive COVID-19 test.

“I’m a big believer in karma,” said Rahm, who also rallied from a three-stroke deficit in the final round to win the 2017 Farmers Insurance Open at Torrey Pines, capping that comeback with a dramatic 72nd-hole eagle. “And after what happened a couple weeks ago, I stayed really positive knowing good things were coming. I didn’t know what it was going to be, but I knew we were coming to a special place, I knew I got [my] breakthrough [PGA Tour] win here and it’s a very special place for my family, and the fact that my parents were able to come, I got out of COVID protocol early, I just felt like the stars were aligning, and I knew my best golf was to come.

“I have a hard time explaining what just happened because I can’t even believe I made the last two putts, and I’m the first Spaniard ever to win a U.S. Open. This was definitely for Seve [Ballesteros]. I know he tried a lot, and usually we think a lot about him at the Masters, but I know he wanted to win this one most of all. I just don’t know how to explain it.”

For Oosthuizen (71–279), it was his sixth runner-up finish in a major championship since winning the 2010 Open Championship at St. Andrews, and second in the U.S. Open (2015). Harris English finished three strokes back in third (3-under 281) after shooting a final-round 68.

Sundays at major championships can showcase plenty of thrills and spills and Torrey Pines didn’t disappoint. The day began with Oosthuizen, Mackenzie Hughes and Russell Henley sharing the 54-hole lead, the latter two never having been in this position. Hughes, a 30-year-old Canadian who had missed his five previous cuts on the PGA Tour, carded a 6-over 77 that included a tee shot on No. 11 that bounced off a cart path and lodged in a tree. Henley, a 32-year-old from Columbus, Ga., who shared the 18- and 36-hole leads, carded a 76 for a 72-hole total of even-par 284 (T-13).

Defending champion Bryson DeChambeau, bidding to become the fourth player since World War II to win consecutive titles, briefly took the lead at 5 under after starting the day two strokes back, only to see his run ended with back-to-back bogeys on 11 and 12, and a disastrous double-bogey 7 on the par-5 13th. He then made a quadruple-bogey 8 on 17 for a final-round 77 to fall into a tie for 26th, nine strokes back of Rahm.

“I didn’t get off the rails at all,” said DeChambeau. “It’s golf. People will say I did this or did that, and it’s just golf. I’ve had plenty of times where I hit it way worse than today and I won. It’s just one of those things where I didn’t have the right breaks happen at the right time.”

Rory McIlroy, the 2011 champion, and two-time winner Brooks Koepka also briefly challenged before fading on the second nine; McIlroy shooting a 73 to tie for seventh and Koepka carding a 69 to tie for fourth. In 29 major-championship starts, the Floridian has now registered an impressive 15 top-10s.

Once Oosthuizen, 38, assumed the lead early on the back nine, few expected him to give it up. A player with a metronomic swing and calm demeanor, was seemingly in control of his game with eight holes left. His bogey 4 on the championship’s most difficult hole, the par-3 11th, was not unexpected. But he failed to birdie the par-5 13th, then drove the ball into the penalty area on No. 17, leading to a costly bogey that dropped him two strokes behind Rahm. When he failed to hole his 73-yard approach shot for an eagle 3 on the 545-yard closing hole, Rahm had secured his first major.

Even as the pressure of the back nine of a major jumbled the contenders, Rahm, No. 3 in the Official World Golf Ranking, managed to stay grounded. He opened with consecutive birdies before suffering his lone blemish of the day on the par-4 fourth. He closed the outward nine by stuffing his 104-yard approach to 3 feet for a birdie. Seven consecutive pars followed until he drained a 24-foot, left-to-right curling birdie on the 434-yard 17th to tie Oosthuizen at 5 under par and set up his dramatic finish.

With his 2-month-old son, Kepa, on the grounds, along with his wife, Kelley, and his parents, Rahm couldn’t have imagined a better Father’s Day gift.

“It’s the exact reason why I won,” he said. “It had to happen in a beautiful setting like this. Nothing in my life has come easy, and definitely managing the emotions of knowing what could have been done today wasn’t the easiest either, but I used it to my advantage in the last few holes.”

Notable
The 122nd U.S. Open Championship will be contested June 16-19 at The Country Club in Brookline, Mass. It will be the first Open played at the venue since Curtis Strange’s playoff win over Nick Faldo in 1988. It is also where 20-year-old amateur Francis Ouimet defeated British stalwarts Harry Vardon and Ted Ray in a playoff to win the 1913 U.S. Open.

Jon Rahm is the first golfer from Arizona State University to win the U.S. Open and second to capture a major after six-time champion Phil Mickelson. In fact, it was Mickelson’s brother, Tim, who now caddies for Phil, who recruited and coached Rahm at ASU. Rahm (2016) joins Jack Nicklaus, Johnny Miller and Ken Venturi in the post-World War II era as winners of the U.S. Open who also finished as the low amateur.

Twenty of the 71 players who completed 72 holes survived final qualifying to advance to Torrey Pines, with Air Force Academy alum Kyle Westmoreland the lone golfer to advance through both stages of qualifying and play the weekend. By playing 72 holes, Westmoreland is exempt from local qualifying next year. Branden Grace (T-7) was the low qualifier, three strokes ahead of 2011 Masters champion Charl Schwartzel.

Torrey Pines’ par-5 18th hole played as the easiest finishing hole in U.S. Open history, yielding 183 birdies and 13 eagles for a stroke average of 4.64. The par-3 11th the was the toughest hole for the week, playing to an average of 3.39.

“I know what happened a couple of weeks ago. Some people might say it wasn’t fair, but it was what had to be done. We still have to be aware of what’s going on in this world. Take care of yourself and everybody around you so we can get over this as quick as possible.” – Jon Rahm on his positive COVID-19 test

“It’s incredible that I finished the way I did. Making that putt on this green where I got my first win, it’s hard to describe.” – Rahm on his 72nd-hole birdie

“He’s obviously had success here at this golf course. I don’t think there’s a golf course he can’t have success on. He’s that good of a player. He was a major champion in waiting. It was just a matter of time.” – Rory McIlroy on Rahm

“This was one of those bucket-list ones for me that I’ve always wanted to play, so I’m very thankful that I qualified and I got in. It’s definitely one of my top five venues.” – Branden Grace after carding a 67 to finish seventh-7

“I love these tournaments. From the U.S. Junior [Amateur] to the U.S. Amateur to now the U.S. Open, I love this golf. It’s my mentality, and I think it really suits my game just plodding along, not having to shoot super aggressive and shoot low scores. It’s been a lot of fun this week.” – Harris English after producing a second consecutive top-5 finish in the U.S. Open by shooting a final-round 68

“Some of my best times in the game of golf have been when I played with my dad; we would go out and play Balboa a bunch, we would go out and play here at Torrey Pines a bunch. Those moments we shared on the golf course are some of my favorite moments in my life, and seeing him out here and sharing this week has been a very special thing.” – Phil Mickelson on playing the U.S. Open in his hometown

David Shefter is a senior staff writer for the USGA. Email him at dshefter@usga.org.