By John Hamilton on April 18, 2021, 9:55 amComments Off on California Unemployment Rate Decreases to 8.3% in March

Sacramento, CA…California’s unemployment rate decreased 0.2 percentage points to 8.3 percent in March as the state’s employers gained 119,600 jobs1, according to data released today by the California Employment Development Department (EDD) from two surveys. This comes after February’s upwards-revised (+15,100 jobs) month-over gain of 156,100 jobs, which alone was more than the 155,400 jobs lost in December 2020 and January 2021 combined. California has now regained almost 44 percent of the 2,714,800 total nonfarm jobs lost in March and April 2020 due to the COVID-19 pandemic. 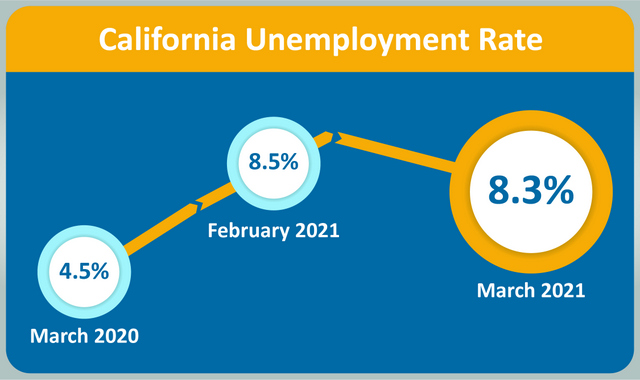 California’s Labor Market, by the Numbers…
California’s month-over unemployment rate improved from 8.5 percent in February to 8.3 percent in March2 down from the 16 percent peak in April 2020.

All but one of California’s 11 industry sectors gained jobs last month. Leisure & Hospitality (+42,400) continued to have the state’s largest month-over increase thanks to Full-Service Restaurants. Trade, Transportation, and Utilities (+32,200) also had large gains thanks to strength in Clothing Stores and Transportation and Warehousing. Strong gains were also posted in Professional and Business Services (+22,000) led by accounting, tax preparation, and bookkeeping firms.

Financial Activities (-600) was the only industry sector to suffer a month-over job loss, which was mainly due to declines in Finance and Insurance, as well as Activities Related to Real Estate.
1. The nonfarm payroll job numbers come from a federal survey of 80,000 California businesses.
2. The unemployment rate comes from a separate federal survey of 5,100 California households.

Data Trends about Jobs in the Economy
Total Nonfarm Payroll Jobs
This information comes from a monthly survey of approximately 80,000 California businesses that estimates jobs in the economy – seasonally adjusted.

California Industries Payroll Jobs by Biggest Month-Over Change
Total Farm jobs – The number of jobs in the agriculture industry decreased by 1,200 from February to 421,900 jobs in March. The agricultural industry had 5,900 more farm jobs in March 2021 than it did the March prior.

Data Trends about Workers in the Economy
Employment and Unemployment in California
This information is based on a monthly federal survey of 5,100 California households which focuses on workers in the economy.