Monterey, CA…As California recognizes Tsunami Preparedness Week​, the California Geological Survey is releasing interactive maps covering Alameda, Monterey, and San Mateo counties. These maps allow users to enter an address to determine whether the property is within an area that may be subject to tsunami flooding. 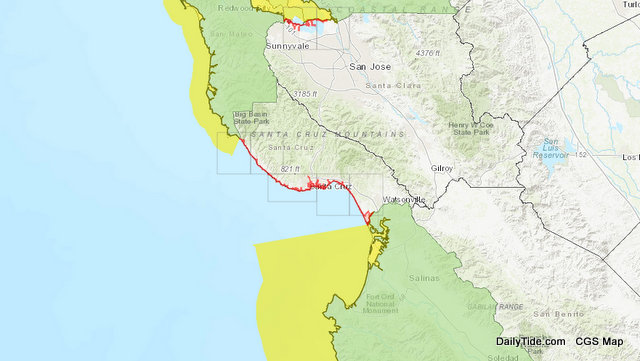 These Tsunami Hazard Area maps serve two purposes. First, using new data and improved computer modeling, they update 2009 tsunami inundation maps showing how far inland a surge of seawater might go in a worst-case scenario. Second, they tie a small buffer beyond the modeled inundation area to roads or landmarks to help local officials easily communicate evacuation plans. As local tsunami evacuation material is developed, it will be added to CGS’ online map interface.
“After 10 years of research following the Tohoku-Oki earthquake and tsunami in Japan, we’re releasing maps with many improvements to keep Californians safe,” said Dr. Steve Bohlen, Acting State Geologist of California and head of CGS. “Japan utilized data from several hundred years of tsunami records in its planning, which seemed perfectly reasonable, then was hit by a once-a-millennium tsunami. So, we’re using a thousand-year scenario as the baseline for our new maps, hoping to avoid the tragic loss of life experienced there. While damaging tsunamis are infrequent in California, if you’re on the coast, you need to be aware of this potential hazard.”
More than 150 tsunamis have hit California’s shore since 1800. Many were barely noticeable, but a few have caused fatalities or significant damage — most recently the 2011 tsunami that not only devastated Japan but caused $100 million of damage to California ports and harbors.
The most destructive tsunami to hit California occurred March 28, 1964. Several surges reaching 21 feet high swept into Crescent City four hours after a magnitude 9.2 earthquake in Alaska, killing 12 and leveling much of the town’s business district. For most of California, the biggest tsunami threat would result from another huge earthquake in the Aleutian Islands.
Changes to the existing tsunami hazard maps are show larger areas of potential inundation along the outer coast of San Mateo County but relatively modest changes in the other areas assessed, with the inundation potential upgraded in some areas and downgraded in others, noted Rick Wilson, head of the CGS Tsunami Program.
“These maps are based on the best data we have, but there’s a margin of error when you’re trying to consider a thousand-year event, so we err on the side of caution,” Wilson said. “The buffer zones on the maps account for that uncertainty. We worked closely with local emergency planners to identify places where mapped tsunami hazards have changed so that they can update their evacuation plans.”
A closer look at the counties covered by these maps, which utilize a magnitude 9.3 earthquake in the eastern Aleutian Islands as the source of the tsunami:​
Monterey County

According to the large Aleutian Island scenario used by CGS, the first surges would reach the Bay Area and Monterey in about five hours.
“That may seem like a lot of time, but it will take an hour or so for the National Tsunami Warning Center to issue a warning to California and then additional time for local authorities to determine whether an evacuation is necessary, ” Wilson cautioned. “The bottom line is, if you’re near the coast and feel strong shaking from a local earthquake or get an official notification to evacuate, move inland as soon as possible.”
CGS, part of the California Department of Conservation, has issued Tsunami Hazard Area Maps in seven counties and hopes to update the maps for the rest of California’s coast within the next two years.