Washington, DC…Total nonfarm payroll employment increased by 263,000 in November, and the unemployment rate was unchanged at 3.7 percent, the U.S. Bureau of Labor Statistics reported today. Notable job gains occurred in leisure and hospitality, health care, and government. Employment declined in retail trade and in transportation and warehousing. 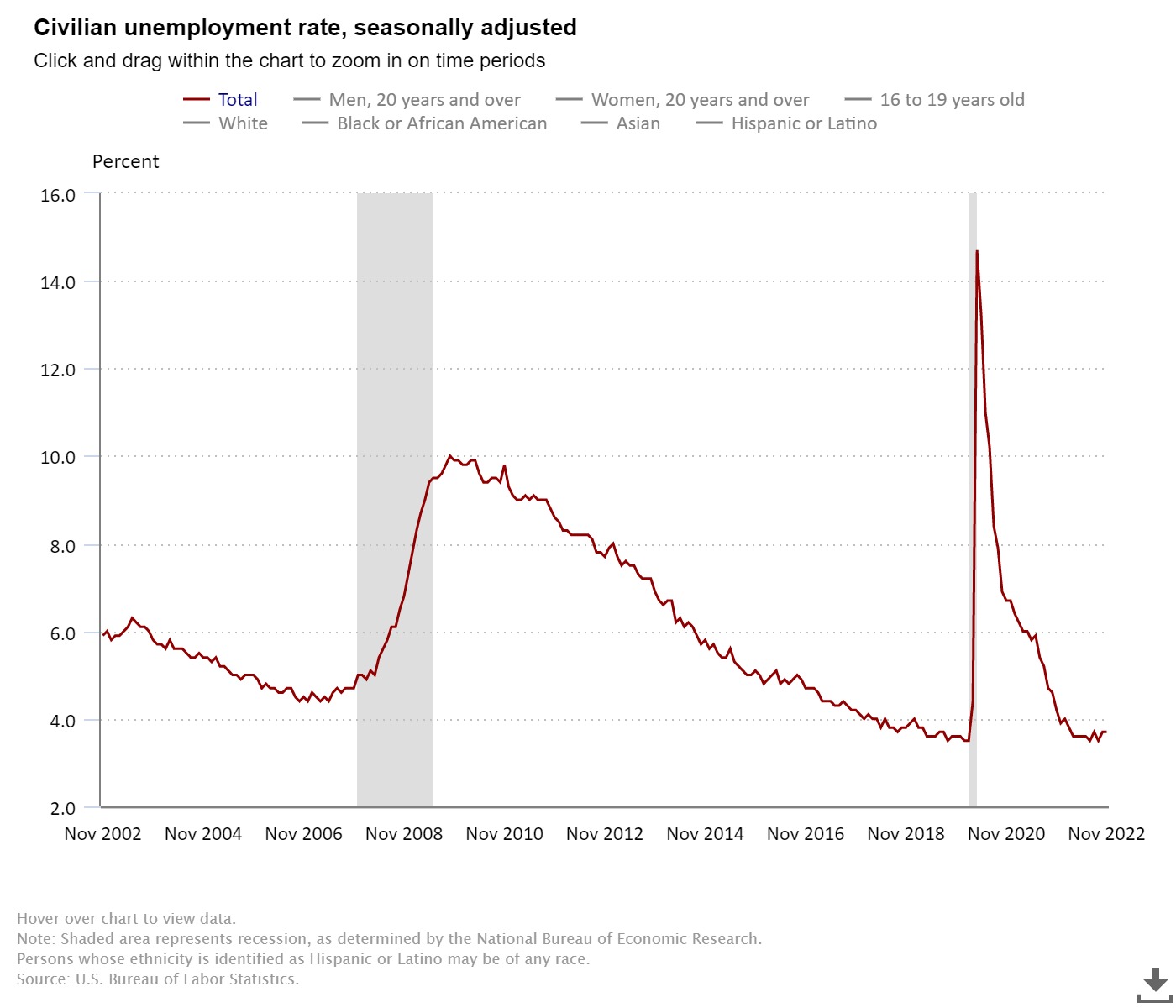 This news release presents statistics from two monthly surveys. The household survey measures labor force status, including unemployment, by demographic characteristics. The establishment survey measures nonfarm employment, hours, and earnings by industry. For more information about the concepts and statistical methodology used in these two surveys, see the Technical Note.

Among the unemployed, the number of permanent job losers rose by 127,000 to 1.4 million in
November. The number of persons on temporary layoff changed little at 803,000.
(See table A-11.)

Both the labor force participation rate, at 62.1 percent, and the employment-population
ratio, at 59.9 percent, were little changed in November and have shown little net change
since early this year. These measures are each 1.3 percentage points below their values in
February 2020, prior to the coronavirus (COVID-19) pandemic. (See table A-1.)

The number of persons employed part time for economic reasons was about unchanged at 3.7
million in November. These individuals, who would have preferred full-time employment,
were working part time because their hours had been reduced or they were unable to find
full-time jobs. (See table A-8.)

The number of persons not in the labor force who currently want a job was little changed
at 5.6 million in November and remains above its February 2020 level of 5.0 million. These
individuals were not counted as unemployed because they were not actively looking for work
during the 4 weeks preceding the survey or were unavailable to take a job. (See table A-1.)

Among those not in the labor force who wanted a job, the number of persons marginally
attached to the labor force held at 1.5 million in November. These individuals wanted and
were available for work and had looked for a job sometime in the prior 12 months but had
not looked for work in the 4 weeks preceding the survey. The number of discouraged
workers, a subset of the marginally attached who believed that no jobs were available
for them, was 405,000 in November, little changed from the previous month. (See Summary
table A.)

Total nonfarm payroll employment increased by 263,000 in November, roughly in line with
average growth over the prior 3 months (+282,000). Monthly job growth has averaged 392,000
thus far in 2022, compared with 562,000 per month in 2021. In November, notable job gains
occurred in leisure and hospitality, health care, and government. Employment declined in
retail trade and in transportation and warehousing. (See table B-1.)

Construction employment continued to trend up in November (+20,000), with nonresidential
building adding 8,000 jobs. Construction has added an average of 19,000 jobs per month thus
far this year, little different from the 2021 average of 16,000 per month.

Manufacturing employment continued to trend up in November (+14,000). Job growth has
averaged 34,000 per month thus far this year, little different from the 2021 average of
30,000 per month.

In November, employment in financial activities continued its upward trend (+14,000). Job
gains in real estate and rental and leasing (+13,000) and in securities, commodity
contracts, and investments (+6,000) were partially offset by a decline in credit
intermediation and related activities (-9,000). Employment in financial activities has
increased by an average of 12,000 per month thus far this year, the same as in 2021.

Employment in retail trade declined by 30,000 in November. Job losses in general
merchandise stores (-32,000), electronics and appliance stores (-4,000), and furniture
and home furnishings stores (-3,000) were partially offset by a job gain in motor vehicle
and parts dealers (+10,000). Retail trade employment has fallen by 62,000 since August.

Employment in transportation and warehousing declined by 15,000 in November and has
decreased by 38,000 since July. In November, job losses in warehousing and storage
(-13,000) and in couriers and messengers (-12,000) were partially offset by a job gain in
air transportation (+4,000).

Employment showed little change over the month in mining and wholesale trade.

The change in total nonfarm payroll employment for September was revised down by 46,000,
from +315,000 to +269,000, and the change for October was revised up by 23,000, from
+261,000 to +284,000. With these revisions, employment gains in September and October
combined were 23,000 lower than previously reported. (Monthly revisions result from
additional reports received from businesses and government agencies since the last
published estimates and from the recalculation of seasonal factors.)