By News Desk on January 12, 2022, 8:46 amComments Off on CPUC Proposal a Giveaway to Utilities at Expense of Consumers & Solar Industry Says Save California Solar Coalition

Sacramento, CA— The California Public Utilities Commission (CPUC) released a proposed decision on net metering, the policy that is responsible for the growth of solar in California by making the state’s most abundant source of renewable energy affordable for consumers of all types. 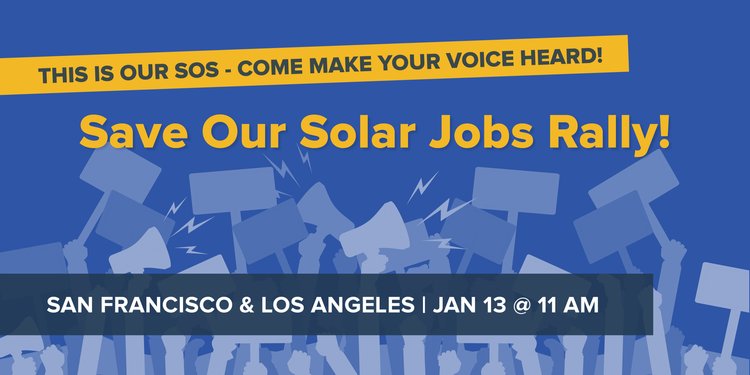 The CPUC proposal would add a $57 per month solar penalty fee for the average residential solar system. A $15 per month credit for the first 10 years would only partially offset the fee, but California would still have the highest solar penalty fees in the country. Low-income ratepayers and commercial customers would not pay the monthly fee. In addition, the commission proposed slashing export credits to approximately 5 cents per kilowatt-hour (kWh) on all solar users, including schools and churches. This is an 80% reduction from the 20-30 cents per kWh credited today for residential customers. Further, the commission reduced the protections for existing solar customers from the previously established 20-year grandfathering, down to 15 years.

The Save CA Solar coalition, which includes more than 600 diverse organizations, issued the following statement on today on the CPUC proposed decision:

Despite the overwhelming popularity of rooftop solar in California and more than 120,000 public comments submitted in support of net metering, the CPUC proposed a giveaway to investor-owned utilities that would boost utility profits at the expense of energy consumers, family-supporting jobs, and California’s clean energy future.

Solar advocates around the state are disappointed the CPUC fell for the utility profit grab by proposing the highest solar penalty fees in the nation and drastically reducing the credit solar consumers receive for selling the excess energy they produce to their neighbors.

The fight is not over for solar advocates. Consumers, affordable housing advocates, faith leaders, environmentalists, conservationists, climate activists, and solar workers and small businesses will continue calling on the CPUC and Governor Newsom to stop the utility profit grab and keep solar growing in California.

The CPUC will hold a final vote on the future of net metering following a 25-day public comment period on the proposed decision and alternative proposals. The proposed changes to net metering would go into effect this Spring.

Members of the Save California Solar coalition weighed in on the CPUC proposed decision:

“California is on a path to 100% renewable energy, and that path requires a sustained commitment to growing rooftop solar. Instead the CPUC is proposing to put a drag on our transition away from fossil fuels. State regulators calculate that to get to 100% clean energy, California needs at least 28 gigawatts (GW) of customer-sited solar by 2045; that’s nearly three times as much as we have today. The momentum that rooftop solar has now would help us reach our goal – but to gut net metering is to gut that momentum. The CPUC needs to put California’s climate change efforts first, ahead of the financial interests of the big utilities.”

“It is a story as old as this country: a new technology is developed, programs and policies are offered to help consumers to adopt the technology and bring down the costs over time, and just when people in Black and brown communities are beginning to be able to afford the technology and benefit from it – the programs and policies are often taken away. That is exactly what the CPUC did in their proposed decision. By accepting the utility profit grab, the CPUC would take California back to a time when solar was a luxury for the wealthy and out of reach for our communities.”

“Our diverse, grassroots coalition is disappointed in the CPUC’s proposed decision, but we are even more determined to keep up the fight to make sure California stays a solar state. In the coming weeks solar supporters will make our voices heard in creative ways online and in person so Governor Newsom understands just how unpopular the utility profit grab is among voters.”

“This is a clean energy and jobs disaster. With this proposal, California would abandon its long-held position as a clean energy leader, threatening the jobs of tens of thousands of hard working men and women who provide clean, reliable energy for millions of consumers today. Governor Newsom needs to clean this mess up and get California back on track as a solar leader.”

“This is really a debate between energy democracy vs. energy monopoly. The big utilities want to protect their control over energy delivery to protect their billions in profit. The environmental justice community wants energy equity where people are free to generate and distribute their own energy in ways that are cleaner and more affordable.”

About Save California Solar

Save California Solar is a coalition founded by the Solar Rights Alliance, California’s association of solar users, to help ensure that rooftop solar continues to grow and benefit every Californian. Learn more at www.savecasolar.org.

CPUC Proposal a Giveaway to Utilities at Expense of Consumers & Solar Industry Says Save California Solar Coalition added by News Desk on January 12, 2022, 8:46 am
View all posts by News Desk →